Lace up your boots, loosen your fingers, and get ready for some WWE CCG action: a new Season of WWE SuperCard is on the horizon.

We're stoked to announce Season 2 of WWE SuperCard. Season 2 is a massive (and free) update to the core WWE SuperCard experience that introduces a brand new look, customizable cards, an enhanced King of the Ring mode, an additional Diva in Exhibition decks, and a deeper roster of talent that spans both WWE and NXT.

Seasons are bigger and badder than updates -- they're new competitive periods that introduce sweeping features you've requested. You asked for more strategic diversity and customization, more cards and enhanced modes, and more Divas in the playing field. With Season 2, we're delivering on all of this.

And it all starts with the cards.

Season 2 cards support a variety of features that their Season 1 counterparts don't have. One of these new features is customization. As you train your S2 cards, you'll receive tokens. Tokens can then be used to level up any ratings slot. For example, if you want the highest POW John Cena Legendary card on the block, you can use up to four tokens to level up his POW rating. If you want a more balanced John Cena, just spread your tokens across the card's ratings slots.

When you combine two S2 cards that have been customized via tokens, that card's Pro form reflects those changes. Then, as you train the card, you'll receive even more tokens to fully customize your card.

We're also adding enhancements to the fold. You can equip up to five multi-charge enhancements on S2 cards -- one for each ratings slot and one for a card's special ability. When you use an enhancement on a ratings slot, that rating is automatically boosted whenever an event in a match-up calls for that stat. When you use an enhancement on an ability, that ability gains the stat of whatever enhancement you used. For instance, if you used a POW boost on a CHA ability, that ability becomes a POW + CHA ability until all the charges are used.

Additionally, as you play with Season 2 cards through match-ups, your cards will automatically level up their skills courtesy another new feature: Play Levels. Different tiers of cards support different amounts of Play Levels, all of which permanently increase a card's overall strength.

Season 1 of SuperCard will still be available after the Season 2 update, but S1 cards are ineligible for play against S2 cards. Your S1 cards, however, are your cards. You can keep playing them in Season 1 Exhibition matches or in King of the Ring mode. It's your call.

Season 2's special Fusion Chamber does offer a way to convert your Legendary and above S1 cards into S2 cards. By using recipes that the game provides, you can Fuse eligible S1 cards into Super Rare and Ultra Rare versions of the same card. For example, if you put a Survivor John Cena card into the Chamber, you'd receive a Season 2 John Cena card with same image from the Survivor card.

You can also use Common through Epic S1 cards to (a) get enhancements for S2 cards or (b) train S2 cards. Regardless of what S1 cards you have, they all have value towards Season 2.

Here's a handy image that displays how this works: 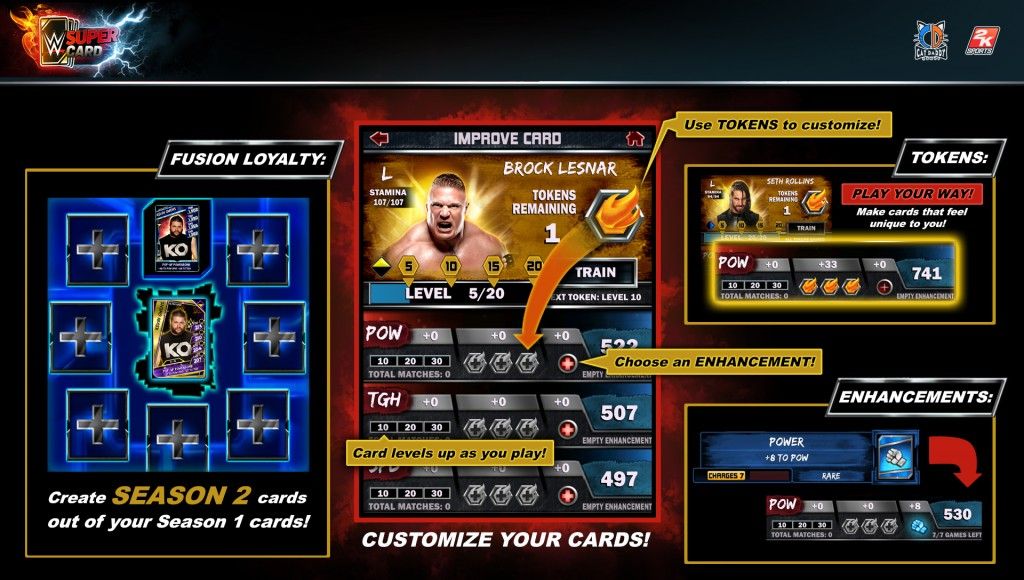 Season 2 of SuperCard is on the way. Are you ready?